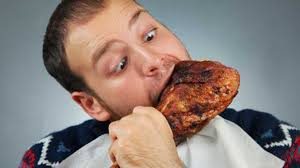 According to Vernon Coleman, eating meat has health hazards because along with the meat you may be consuming hormones, drugs and other chemicals that have been fed to the animals before they were killed. No one knows precisely what effect eating the hormones in meat is likely to have on your health. Some farmers use tranquilizers to keep animals calm. When you eat meat you are, inevitably, eating those drugs. In America, over half of all antibiotics are fed to animals and it must not be a coincidence that there is a sharp rise in the percentage of staphylococci infections resistant to penicillin that have gone up from 13% in 1960 to 91% in 1988.

It is also known that vegetarians visit hospitals about 22 % less than meat eaters and have shorter hospital stays. Vegetarians tend to be fitter and healthier than meat eaters. Many of the world’s most successful athletes follow a strictly vegetarian diet.

What is not well known is that meat eating has devastating environmental consequences.  Take a look at these statistics that are taken from a website called as peta2.com and then decide for yourself, whether you want to be a vegetarian or a non-vegetarian.

In the U.S., animals raised for food are fed 70 percent of the corn, wheat, and other grains we grow. The world’s cattle alone consume a quantity of food equal to the caloric needs of 8.7 billion people—more than the entire human population on Earth.

Land:
Of all agricultural land in the U.S., 80 percent is used to raise animals for food—that’s almost half the total landmass of the lower 48 states.

Raising animals for food causes more water pollution in the U.S. than any other industry because animals raised for food produce 130 times the excrement of the entire human population—87,000 pounds per second! Much of the waste from factory farms and slaughterhouses flows into streams and rivers, contaminating water sources.

Of all raw materials and fossil fuels used in the U.S., more than one-third is used to raise animals for food. The energy needed to produce the food that a meat-eater would burn in walking a given distance is greater than the energy needed to fuel your car to travel the same distance.

Each vegetarian saves an acre of trees every year! The tropical rain forests are being decimated to create grazing land for cattle. The space equivalent to seven football fields is destroyed every minute. Fifty-five square feet of rain forest may be razed to produce just one-quarter pound burger.