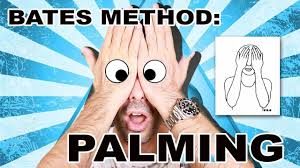 Bates method is a simple method of teaching people to make use of their eyes in a relaxed manner.  This technique was devised by, Dr. William H. Bates who was a leading Ophthalmologist in the New York Postgraduate Medical School.  After seeing over 30,000 patients, Dr Bates concluded that if the mental thinking in the patients improved positively by 50%, their vision also improved.  Dr Bates firmly believed that defective vision was not necessarily as a result of damage of the eye or deterioration of the lens, but it was often as a result of mental stress. He also concluded that for the accommodation of the eye and a sharp vision, the extrinsic ocular muscles of the eye played a major role and not the lens of the eye.

He put his concepts into practice by introducing ‘Palming’; where the patient cover the closed eyes with the palms of the hands, crossing the fingers on the forehead, so as to avoid the direct pressure on the eyeballs.  Some practitioners also combine meditation and visual imagery to this method.  He also advocated the practice of alternate focusing to objects near and far to strengthen the external ocular muscles of the eye.

Bates also believed that the defective eye blinks rarely and that the normal eye blinks both gently and frequently and he advocated his patients to blink the eye consciously.  This improves the vision by lubricating the eyeball and counteracts the harmful effects of staring. 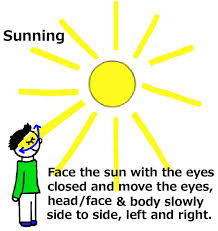 Bates also believed that sunlight was also an important ingredient in improving the vision and extorted his patients to sun themselves with closed eyelids. This should be done along with the silent movement of the head gently, from side to side. This was called as ‘Sunning’.

Many persons who had serious myopic problems improved after trying the Bates method and the power of their glasses came down.

The Bates Method combines Palming, Sunning, Meditation and Visual Imagery.  It has definitely improved the eyesight of thousands of sufferers. The Bates method combines the rational use of scientific principles with Holistic methods such as meditation.